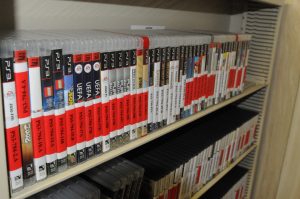 When your games collection begins to seep off the shelf or draw you designated for it, then titles end up in stacks on the floor or balanced around your console, it may be time to downsize your library.  Even if it hasn’t quite got to that stage yet, many people are hanging on to games that they haven’t played, don’t know how to play and don’t intend to play – and what’s the point in that?

There comes a time when it helps to separate the wheat from the chaff, and gain extra space for titles that you genuinely want into the bargain.  Whether you choose to sell your unwanted games or donate them to a local charity shop, here are three ideas for how to start the purge…

As soon as you’ve paid out for a new game that money is gone and it’s never coming back – certainly not at the level you spent it anyhow.  That’s why your decisions about which games to keep and which to get rid of should not be influenced by what they cost in the first place.  Once a title is in your collection, you can only measure its worth in terms of how much fun it is to play, if you’ve lost that spark, then it’s over.

Would you choose it again?

A simple way of assessing whether something is worthy of a place on your shelf is by considering whether you’d bother to replace it, if you broke or lost it.  It’s not unheard of to lend games out and not have them returned, or to scratch one so it’s just impossible to use, but if that happened would you hanker after a replacement?  If you cannot imagine life without that particular title and you know you’d have to get hold of another copy, then it’s a sign that it’s a keeper.

If you’ve given in to the feel-good buzz of buying a game without any planning, reading of reviews or genuine consideration, there’s a chance it’s still gathering dust six months later because it turned out to be less enjoyable than you were hoping.  We’ve all experienced that flutter of excitement at cool art work and promising case reviews by people we’ve never heard of, but if you don’t eventually start to like the game play, it’s just not worth keeping it around.