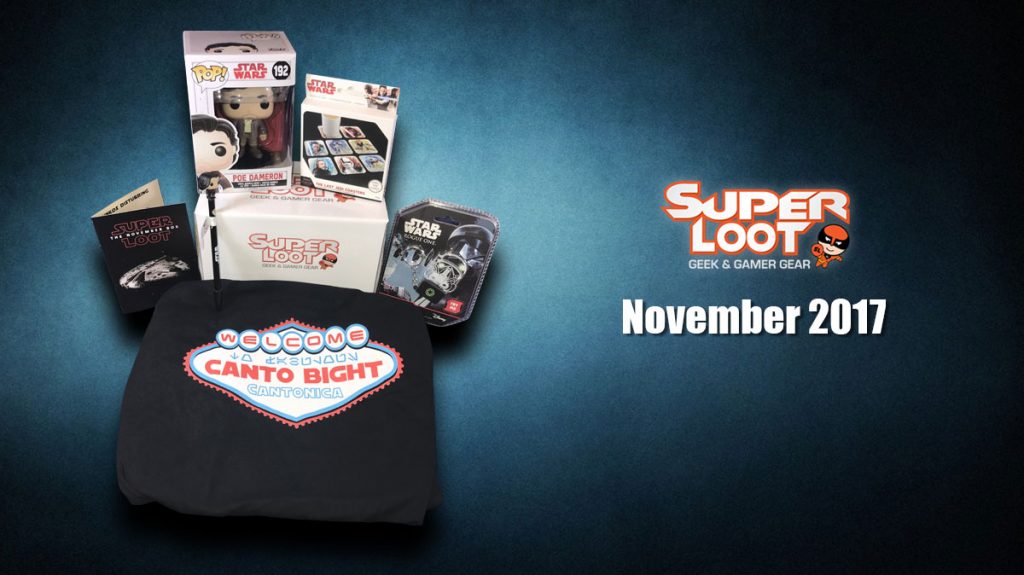 To celebrate the launch of what will most probably be the biggest film of 2017, Super Loot has themed its November Box with all things Star Wars.

This month we have The Force Awakens and Last Jedi’s favourite X-Wing Pilot Poe Dameron as a POP! Vinyl Figure. Poe Dameron is a commander in the Resistance’s Starfighter Corps and one of Leia Organa’s most-trusted operatives. The son of a rebel fighter pilot and a rebel commando, Poe grew up on stories of Alliance campaigns. A decorated X-wing pilot, he can fly anything – which is fortunate given how often his headstrong nature leads him into trouble.

The Force will be with you when you are wearing our Star Wars / Vegas inspired T-Shirt featuring the Casino City of Canto Bight.

Star Wars: The Last Jedi comes to POP! and Super Loot, the number one stylised collectible in the world. Collect 1 of 4 characters from The Last Jedi as POP! Pen Toppers.

Carry the power of the Force with you wherever you go with a Death Trooper™ Keyring Light. A great little pocket light with convenient keyring attachment, you’ll have the power of green light at your fingertips, direct from the Dark Side!

Use the protection of the Force to keep unsightly stains from your desk or table with the brilliant Star Wars: The Last Jedi Coasters.

Order before the 15th December to get the our Christmas Box – Groot would approve!