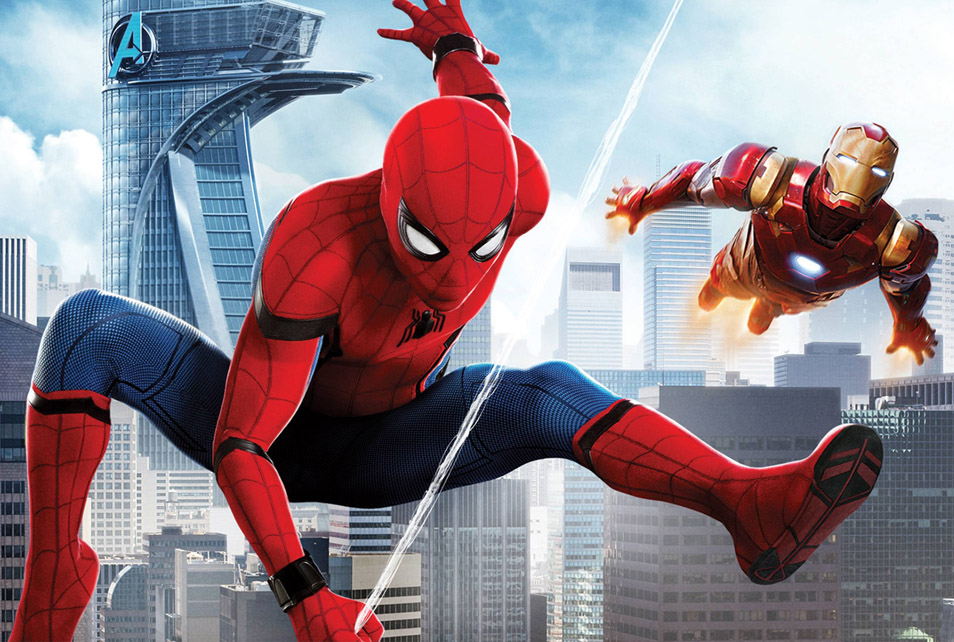 Swinging into a cinema near you is Spider-Man: Far From Home, where Tom Holland reprises the role as Stan Lee’s friendly neighbourhood Spider-Man. Many fans had given up on ever seeing a decent Spider-Man movie, but this one certainly delivers! Here’s why: 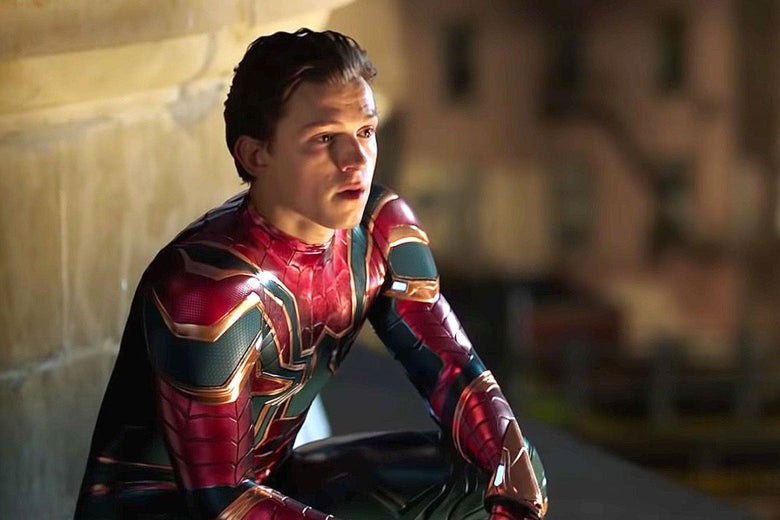 Tom Holland‘s rendition of Spider-Man is by far the best that Hollywood has ever given us! Holland brings such joy and vitality to the role in a way that Toby Maguire (2002, 2004, and 2007) and Andrew Garfield (2012 and 2014) never did. Let’s all pretend those movies never happened, shall we? The studios certainly have.

Holland’s Spider-Man is charming, funny, and relatable while also being able to tug on the heart strings in moments of drama. His athletic skills are impressive, and make him dynamic and believable as the web-slinging, back-flipping hero. As a long-term Spidey fan, Holland delivers on every aspect of Peter Parker and his super-charged alter ego that the comic books made me fall in love with.

Another super cool feature of Far From Home is that Spidey is joined by Samuel L. Jackson (as Nick Fury), Cobie Smulders (as Maria Hill), Jon Favreau (as Happy Hogan) and many other friendly faces. Jake Gyllenhaal also joins the team as Quentin Beck (more on him later!) and there’s a cameo from J.K. Simmons reprising his role as the original J. Jonah Jameson.

2. A web of connections to the MCU 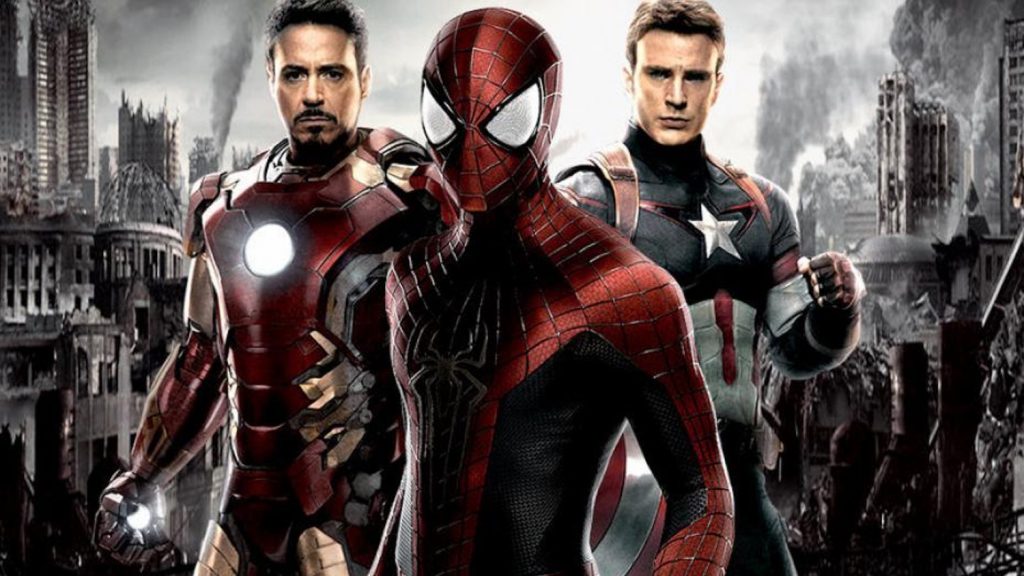 This latest installment of Spider-man’s adventures on the big screen is amazing but does require a certain level of understanding of the Marvel Cinematic Universe.

Technically Far From Home is a sequel to Sony’s Spider-Man: Homecoming (2017), where Peter Parker (i.e. Holland) battles the Vulture (played by Michael Keaton). An endlessly likeable Parker tries to balance normal high school life (eg. getting a date for the homecoming dance) with crimefighting (e.g. holding a ferry together with his webbed hands).

This is a key departure from the Spider-Man comics, as usually Peter makes his own suit and goes through a series of totally lame outfits before landing on the iconic red design. As a result of this, Holland’s suit is WAY more advanced than any previous Spidey and is connected to Iron Man’s technology (more on that later!).

In another cinematic first (though not a comic book first), this Spider-Man becomes an official member of the Avengers and plays a key role in an epic Avenger V Avenger battle sequence in Civil War. Holland brings some much much-needed comic relief to an otherwise tense film about a group of friends arguing. Spider-Man: Homecoming occurs after the events of Civil War, and Peter is back at school trying to hide the fact that he just fought Captain America.

In Avengers: Infinity War (2018), Spider-Man accidentally ends up in space with Iron Man, Dr. Strange and the Guardians of the Galaxy crew. Throughout the film, the various Avengers try to prevent Thanos (a huge purple alien played by Josh Brolin) from collecting the Infinity Stones (i.e. super-dooper rocks with magical powers).

Ultimately the Avengers fail, and Thanos kills half of all life in the universe, including Spider-Man. The Avengers are not immune to ‘the snap’ and many of our beloved heroes disappear into nothingness. There was not a dry eye in the house when Peter dies in Tony’s arms at the end of the film.

But fear not! The events of Avengers: Endgame (2019) reverse ‘the snap’ and Spidey takes part in the most epic battle EVER, that brings together characters from the 22 Marvel Cinematic Universe films. If you’re one of the few people who haven’t seen it yet, Marvel will be re-releasing it to cinemas with extra footage; so go check it out!

As a side note, Far From Home is not linked to the animated Spider-Man: Into the Spiderverse (2018), but could easily be part of the multi-verse that this film explores. If you’re a Spidey fan you will love this one (there’s even a Spider-Pig!). [ Do you remember this catchy song: Simpsons Spider Pig ?] 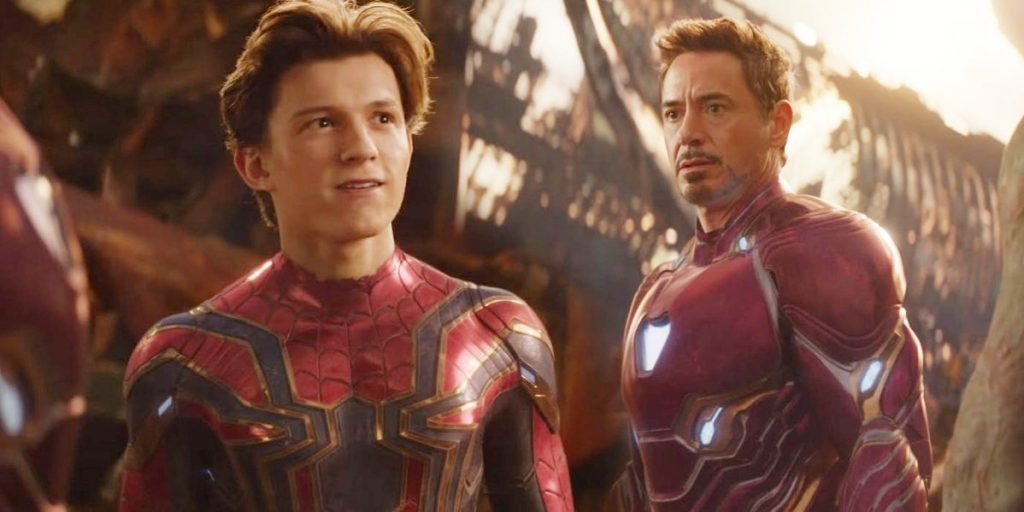 Far From Home occurs a few months after the events of Endgame, while the world is still reeling from the catastrophic events that killed and then resurrected half of the universe. The film’s intro serves as a recap, and explains that there was five years between ‘the snap’ that killed people, and ‘the blip’ that brought them back.

In an unusual move, the Far From Home trailer started with a spoiler warning (here) as it showed Peter mourning the loss of Tony Stark. The trailer also asks Spidey “Are you going to be the next Iron Man?” and tells us that all the other Avengers are unavailable.

Peter receives a final gift from Tony Stark which gives him control of all Iron Man’s databases and weapons systems, including a massive orbital weapons supply. The gift (i.e. a set of super sunglasses) is equipped with the artificial intelligence E.D.I.T.H, which stands for “even in death I’m the hero”. Classic Tony Stark!

The influence of Iron Man is inescapable in this film. Not only is it full of Iron Man tech and Iron Man memorials, the villain is also a product of Tony Stark’s past leadership failings (more on that in a minute!). Peter Parker is hugely affected by the loss of Tony, and his death has a brilliant symmetry to the Uncle Ben tragedy from the classic Spider-Man origin story. 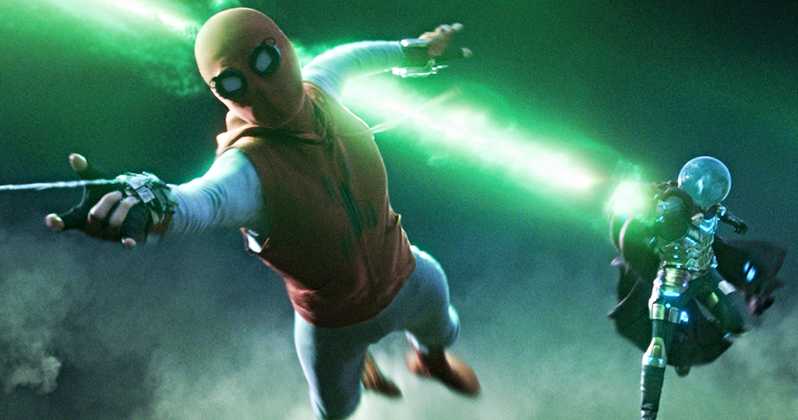 [Warning: There are spoilers ahead!] The Far From Home trailer shows Spider-Man fighting a set of Elementals (i.e. creatures made out of the four elements) with the help of Quentin Beck. Beck adopts the name Mysterio, and presents himself as a hero from another dimension who has a plan to save our Earth from the creatures that destroyed his.

Peter welcomes this new role model and is quick to trust him. However, Spider-Man fans know that Mysterio is a supervillain and master of illusion. Even for the uninitiated, a name like Mysterio will probably ring alarm bells, because comic-book names ending in O are usually reserved for baddies (e.g. Synestro and Magneto).

In Far From Home Mysterio is a former employee of Stark Industries, and he has assembled a team of disgruntled ex-employees with mad skills and a mad plan. This was an inspired departure from his original comic-book origins as a failed actor and special effects artist.

The pressure to fill Iron Man’s shoes becomes too much for Peter, and he gives control of E.D.I.T.H to Mysterio. Knowing that Mysterio is a villain actually heightens the tension rather than detracts from it, and I found myself wanting to yell at the screen “NO Peter, don’t trust him!”.

An epic battle ensues when Peter realises that Mysterio’s intentions are less than honourable. Peter reclaims control of E.D.I.T.H. and finally realises that with great power comes great responsibility. While he may not be wearing the Iron Man suit, he takes on the mantle of Earth’s protector. In many ways Spider-Man is the next Iron Man, and he has the potential to be even better because he won’t be clouded by Tony Stark’s massive ego.

Mysterio’s villainy is cemented in the final scene, when he frames Peter for his murder AND reveals his secret identity to the world! It is an amazing “oh crap!’ moment that mirrored the “I am Iron Man” moment in the first Iron Man (2008) film. 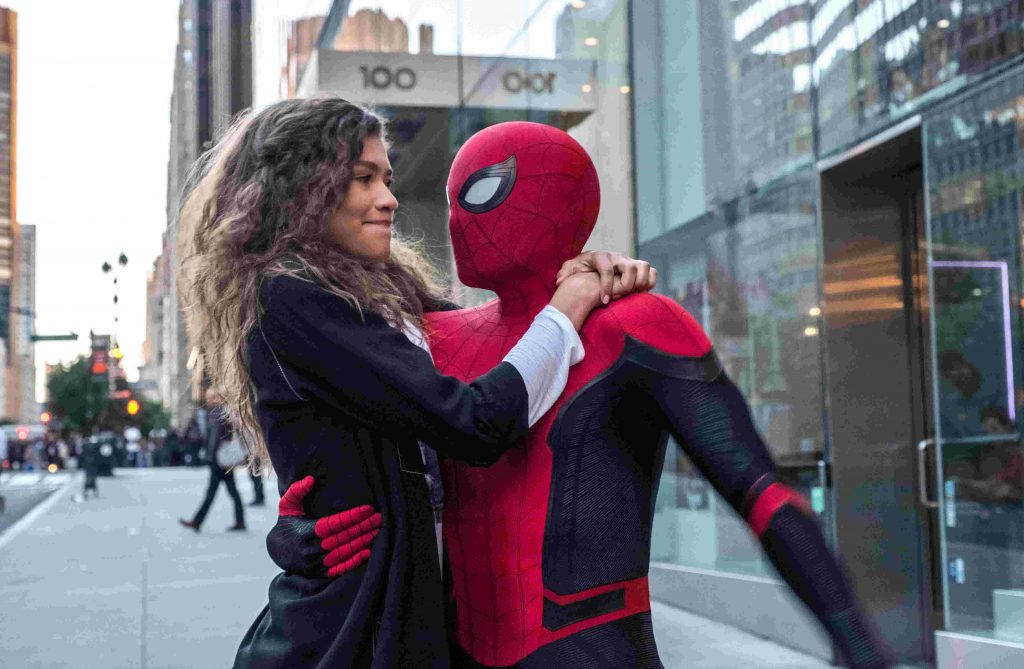 Far from Home is a marvellous movie! Not only does it give us great action, but it also gives us charming ‘coming of age’ moments. Spidey is on a school trip to Europe and his main goal is to ask out MJ (played by Zendaya). The two have great chemistry, and Zendaya provides a strong and sassy MJ that complements Peter’s awkward naiveté perfectly.

While Spider-Man is usually a safe bet for kids, this one does have some scary scenes (e.g. a zombie Iron Man) that may frighten younger viewers. Kids under 8 may need a well-timed toilet break to avoid these intense moments when Spidey fights Mysterio.

Poor Spidey keeps having to go save the world, when all he really wants is to sit beside MJ on the bus. This storyline is very enchanting, but I look forward to seeing Holland’s Spider-Man once he graduates and (hopefully) develops his investigative journalism and / or scientific expertise. 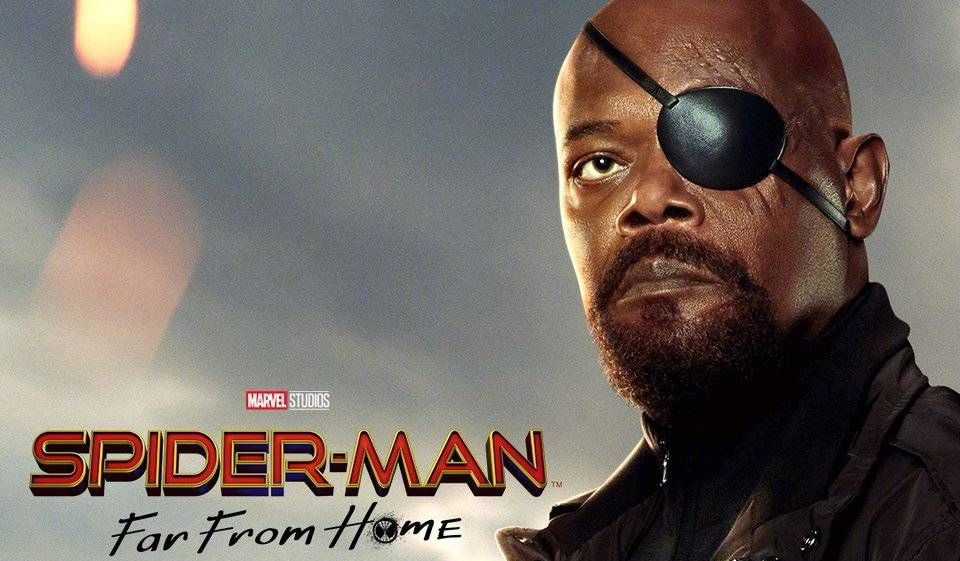 It’s not an MCU movie without a post-credits scene. If you wait until the very end of the film, (ie. there is time to go to the toilet and come back if you need to) the post-credits scene reveals that Nick Fury and Maria Hill were actually Skrulls throughout the film….. Pause for dramatic effect…. The real Fury is shown on some sort of space station, and his impersonator (Talos, played by Ben Mendelsohn) calls to ask him to return home.

What the heck does this mean?! Well, Skrulls are shapeshifters that we were introduced in the Captain Marvel (2019) film. Last time we saw them, Captain Marvel (played by Brie Larson) was going to travel through the universe to find them a new planet. The film was set in the mid-90s, so it was assumed that they were long gone and settled on their new world. Especially since they weren’t mentioned when Captain Marvel returns to earth for Endgame.

As always, the post-credits scene raises many questions such as:

I guess we will just have to wait for Phase 4 of the Marvel Cinematic Universe!

Even with the occasional awkward high school moment, Far From Home was certainly worth watching. The roles were well cast, the action was dynamic, I laughed, I cried and I totally enjoyed myself. I rate it four out of five stars!

Special thanks to our resident Aussie Super Looter Kara for authoring this article. Kara and her husband Mark are both huge geeks of the highest order, with a particular passion for DC, Marvel, and Disney. To help take their love of fandom to the next level, they’ve recently launched their new YouTube channel Wonder Vault, which we highly recommend you check out and support! Or you can check out their website at www.thewondervault.com

Posted in Film
← Super Loot Want YOU!The 10 Most Anticipated Movies For the Rest of 2019 →