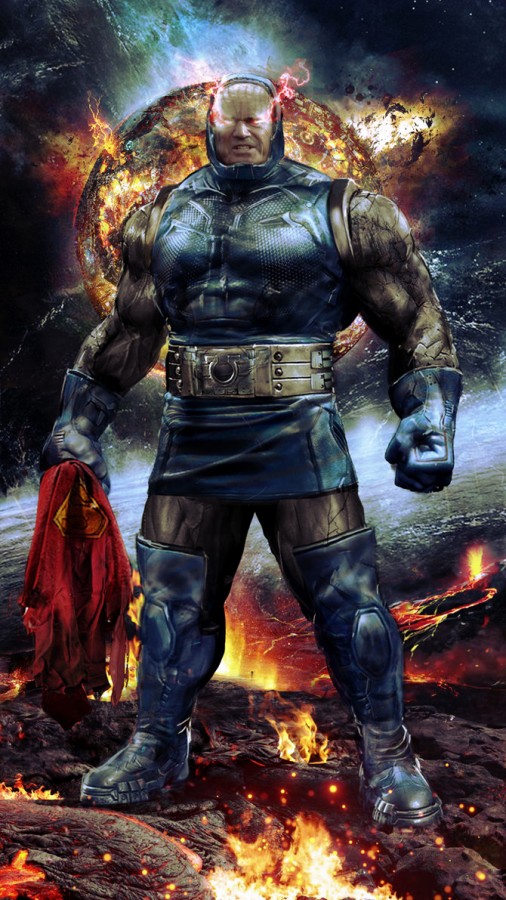 Batman V Superman: Dawn of Justice dropped more than a few hints about the mega- villain who’ll be appearing in the next DC outing.  At the end of the film, when an apparently broken Lex Luther says: “He’s coming. The bell has been rung”, some fans believe it’s almost certain that he’s expecting Darkseid.  Darkseid – pronounced Darkside – is an intellectual heavy weight with the muscle of Doomsday, but far more destructive and terrifying powers.

Two other clues emerged earlier inside Batman’s weird dream, first, the flying creatures who attack him look exactly like Darkseid’s Parademons who carry out the frontline dirty work, and second, he sees the Greek letter Omega – Ω – carved into the land between him and a ruined city.  The letter is a reoccurring motif in  outfits worn by Darkseid and Omega Beams are the energy force which he can shoot from his eyes and hands in battle.  Even more terrifyingly, he can raise the dead and bring them back to fight for him once again.  Back home, Darkseid is the glorious leader of Apokolips, a desolate burning planet that’s only accessible by the Boom Tube – an interdimensional travel solution not fully explained by science .

Darkseid is one of the Justice League’s worst enemies; he was brought into the DC Universe by ex-Marvel writer, Jack Kirby in 1970 and is generally considered to be the baddest brute around.   He leads a group of cruel and evil gods in a quest for the Anti –Life Equation, a formula that wipes out free will in any sentient being –

something that would enable him to take over not just mankind – but all existence.

Although he breaks off now and then to take on the entire Justice League singlehandedly, his arch enemy tends to be the nearby planet of New Genesis.    As the religious overtones would suggest, it’s generally considered to represent the ‘good’ to Apokolips ‘evil’.  New Genesis is covered in a carpet of lush green vegetation, and ruled by immortals.

In the comics it’s been a tumultuous few years for the DC multi-verse, with Darkseid almost achieving complete domination in Final Crisis and a new start in Flashpoint, where he was revealed as the threat which originally united the Justice League.  The evidence for his arrival on screen seems overwhelming, but elsewhere on the net, commentators believe that it won’t be the man himself, but his uncle, Steppenwolf, who’ll be tearing up the League.  It remains to be seen whether a full on confrontation involving the man himself will unfold.