Unlike unbelievably bad films it’s almost impossible to enjoy a complex video game in an ironic way.  The worst examples are not just gratingly dull, but glitchy and unplayable.   To sort the good, the bad and the ugly, online gaming gods Metacritic hand out a number out of 100 for all new releases based on independent reviews.  Good games score at least 75 and to be considered ‘great’ a release has to get over 90. So far this year the re-mastered Last of Us has a score of 95, closely followed by Dark Souls II with 91, but what about the true stinkers at the other end of the scale?

After being described as an ‘interactive turd’ by one reviewer, it’s hard to see how Rambo can be loved by anyone other than hardcore 1980’s action movie fan boys.  From the rendering of each character, to the monotonous game play that mainly revolves around guns, bangs and ammo, Rambo is like a bad rail shooter from 1985 – just with better graphics.   There’s little intuition, planning or cunning needed – the generic looking baddies don’t flinch let alone run, so it’s just about the ability to hit a stationary target.

In a game with more bugs that the average garden shed, including one that initially made completing the final level impossible, you play as the bitter unpleasant pirate, Christopher Raven.  Ravens Cry also chucks in homophobic insults from the crew, casual racism and banter about rape from various villains. In case you don’t hate it enough, the entire experience is made worse by the clunky combat sections and input delays that make you feel like the software would refuse to acknowledge the keypad entirely give half a chance.

After escaping from the clutches of Microsoft, Bungie was expected to use its new found freedom to create fantastic games that amazed the world.  Unfortunately, the release of Destiny last September proved to be an underwhelming experience.  The narrative follows a well-trodden path though solar exploration, alien hostiles and 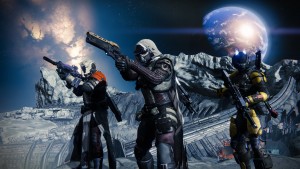 protecting the earth, but worse still, the cut scenes weren’t fleshed out enough to make you care about the characters or any of the derivative action.   Although players loved the locations, and the soundtrack was given added kudos because it was written by old master Paul McCartney, even in this area, the game was dragged down by poor weapon sound effects and over simple missions.