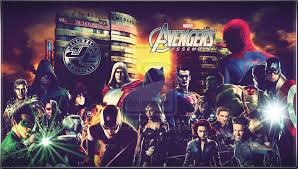 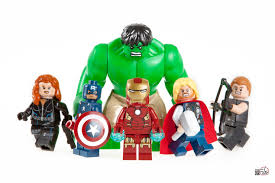 instalment in this monumental franchise; the visuals are mind blowing, the storyline’s on fire and everyone still looks hot in their costumes – aside from that, what new stuff did we learn about the Avengers universe? For a start they’re bringing in the new characters that were briefly shown post-credits in the last Avengers film, then there’s the long-awaited Hulkbuster suit and finally we get to meet The Vision, an enigmatic fusion of human musculature and technological genius. 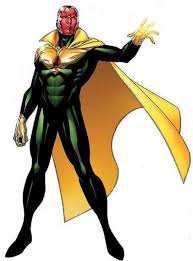 The Vision
The Vision appears very briefly as a crimson face with incredible cheekbones at the very end of the trailer. In the context of the film he has been pretty much kept under wraps, so far the director, Joss Wheldon, has mainly stuck to discussing his casting decision and how the British actor chosen to play him, Paul Bettany, will approach the part. Bettany has been in the Marvel franchise for a while now, playing Stark’s slightly aloof and deadpan AI, Jarvis. In the comics, The Vision is a form of android given a consciousness by Tony Stark and Bruce Banner, but created by Ultron, possibly from the remains of the Human Torch. The story goes that Ultron, having been created by Stark, wanted to prove that he too could breathe life into a heap of metal and then use it to smash the Avengers.
The Hulkbuster Suit
This has been a favourite in the comics for a while now and fans have been excited ab 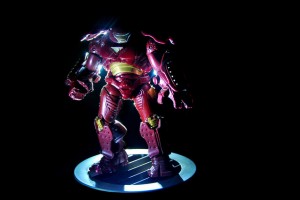 out seeing it writ large in the cinema. The suit is designed by notorious billionaire playboy philanthropist, come Scrapheap Challenge competitor, Tony Stark and is supposedly powerful enough to stop the hulk when he’s on a rampage. As we saw from the Hulks v’s Ironman sequence in the trailer, the Hulkbuster armour is certainly beefy enough to do the job. When the hulk stabs Stark with a traffic light the suit absorbs the blow and better still as bits fly off in the scrum, new parts just zoom in and snap on to take their place, like Lego, but cooler.
Quicksilver and Scarlet Witch – The mutant twins
Quicksilver was first spotted helping Magneto escape a plastic prison in X-Men Days of Future Past, but these two new characters were initiated together into the onscreen Marvel world briefly at the end of Avengers Assemble. They were contained in maximum security cells, deep inside a grimy looking underground facility, but still managed to look unnerving in an Emo kind of way. Quicksilver was bouncing off the walls and Scarlet Witch was manipulating an object; both showing off the gifts that are set to become notorious in Age of Ultron. It’s expected they’ll stay on the edge of the Avengers tribe and remain villainous at heart, but at some point they’ll get drawn in closer. Hawkeye is heard telling them: “If you step out that door, you’re an Avenger”, but will a few stern words from him be enough to stop the Maximoff twins misbehaving? Unlikely – let’s face it, Hawkeye’s no Black Widow.[/vc_column_text][/vc_column][/vc_row]

Posted in Film and tagged Avengers, film, Marvel, new releases
← Disturbing game Easter Eggs that change everything you thought you knew…Four heroes of gaming you want on your side during an alien invasion….. →