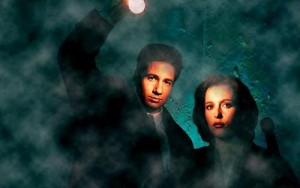 US broadcasting company, FOX is in the middle of an X-Files reboot that will comprise of a six episode miniseries.  We’ve already been teased with a little footage in a trailer, but it’ll be January 24th before the programme hits our screens.  The first episode will be called The Struggle and here’s a little run down of what else we know so far.

The scares will be box fresh

As far as the writing goes, we’re good, because the series original team will be back onboard.  Darin Morgan, James Wong and Glen Morgan have explained they’ll be creating a new monster each week, but don’t expect these to be drawn from existing myths like many of the original ones were.  So far the working titles are Home Again and Mulder and Scully meet the Were-Man…that last one sounds pretty much like a legend we’re all familiar with – but we’ll have to wait and see.  Don’t expect any of your favourite creature features from the old shows, producer Chris Carter has made it clear: “We hope to scare you in brand new ways”.

We last saw the partners in The X-Files: I Want To Believe, released in 2008, since then both have moved in different directions.  Fox remains a maverick with a shaky home life and little to keep him grounded.  David Duchovny feels viewers will get a sense of this through the characters wardrobe. “He’s wearing bad jeans, so you can just extrapolate from my wardrobe. He’s in a dark, dark place.”

At some point during the season the Agents will be investigating an alien abduction.  The victim will be played by Annet Mahendru, better known for her role in The Americans, and a talk show host, Joel McHale, will be the informer.

Why only six episodes?

David Duchovny was keen to return to the franchise, but only if the season was considerably shorter than previously.   FOX granted his wish, but it’s also a great way for them to test the water before investing in more episodes.  Both actors have said they’re happy to return to their roles for 6 shows a year, so it could become an annual thing.

Hmm…depends who you talk to.  Duchovny has told journalists its ‘like they never left’, but Gillian Anderson had a more contemplative answer: “it felt like [Scully] was further away from me than I’d thought she would be. But I’ve also worked really hard at putting her entirely to sleep, so that was successful; she’s just taken longer to wake up.”

Posted in TV and tagged X-Files
← Gaming news; what we learnt this monthSix bits of cool weird stuff, you can actually afford →